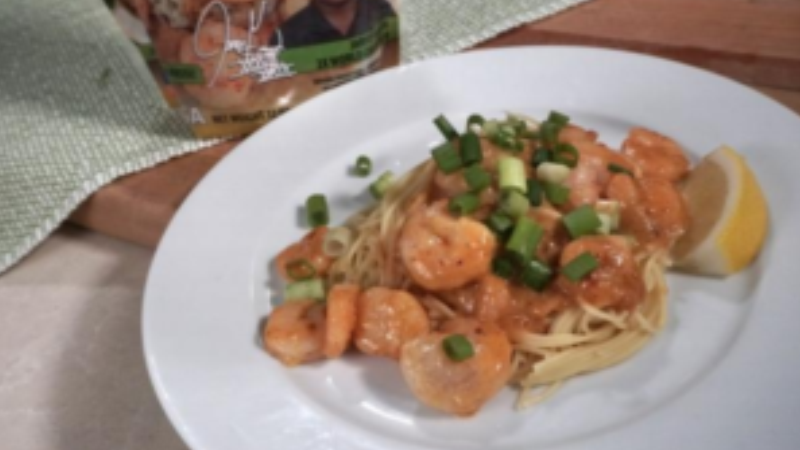 Jarvis Green won two Super Bowls with the New England Patriots and played for nine years in the NFL. These days, he’s all about the shrimp.

His Louisiana-based seafood company, Oceans 97, pays homage to the number he wore as a defensive lineman. But his is a forward-looking endeavor that he hopes will support Gulf Coast fishermen while loading up the rest of the country on native shrimp. He has sold his seafood on QVC as a food personality. The $9.99 bags just hit the freezer section in Stop & Shop grocery stores up and down the East Coast, including in Rhode Island.

He is the latest cook to make a Small Bites video for The Journal. Green demonstrated how to prepare his Wild Caught Coconut Curry Shrimp. The 12-ounce bags come with a ready-to-cook dinner for two with shrimp and sauce. Home cooks only have to buy and prepare pasta or rice or the accompaniment of their choice.

“With this product, anyone can be chef,” he said as he sauteed the shrimp.

Though his home is in Louisiana, he spends a lot of time in Rhode Island.

“I fell in love with Providence,” he said.

His first dinner in the city was at the Providence Oyster Bar on Federal Hill. It was defensive-line dinner with coach Pepper Johnson. The whole experience impressed him. As a kid growing up in Southern Louisiana, he did not have the luxury of seafood dinners.

He did like cooking with his mother and grandmother, though.

“I like to make people smile,” he said. As teens, he and his twin brother, Jason, hosted parties during which they served food. It not only brought on those smiles but it made them some money.

Still, he said, “I never thought I’d be in the food industry.”

But nothing was like that first Providence dinner, which lead to others, and eventually he interned with the Atwells Group of restaurants. He cooked with chefs and learned the science of cooking.

“I was a fourth-rounder [in the NFL Draft],” he said, “and I knew I had to plot a career after football.”

Green is now six years into business in the shrimp industry and three into Oceans 97.

“My shrimp is 100 percent from the Gulf of Mexico and from local families [of fishermen],” he said. “We want to get the fishing industry back to where it was.

“The U.S. imports $1.7 billion in shrimp annually,” he said. Only 8 or 9 percent of all shrimp sold is native to the United States.

The impact of Oceans 97 will grow when his company starts supplying Walmart in September. That launch will occur after processing is ramped up.

The company is certified a Minority Business Enterprise and in the Supplier Diversity program for both Google and Disney. That’s helped open doors, Green said.

He expects his company to grow internationally.

Green’s tips for preparing his shrimp include not overcooking it and draining off any moisture before adding the sauce. Locally, it comes in three varieties — the curry, Red Gravy Shrimp and Pomodori Shrimp. All the shrimp are medium-size and come peeled and deveined.