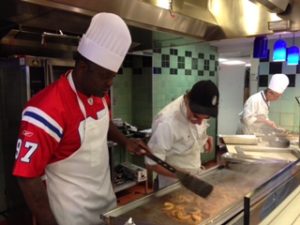 Jarvis Green played 121 games over nine seasons with the Patriots before retiring following short stints with the Denver Broncos and Houston Texans in which he didn’t get on the field in 2010.

The 6-foot-3, 285-pound defensive end was mainly a spot starter and super sub in New England after being drafted in the fourth round out of LSU in 2004, a key cog on a terrific line that included Richard Seymour, Vince Wilfork and Ty Warren.

Green has been out of football for seven years now and, while there plenty of things he misses about the NFL, one of them isn’t getting out of bed the day after a game feeling as if he had fallen off a 20-foot ladder and then been run over by a motorcycle.

“What I miss least is waking up the next morning and barely being able to walk, being in pain,” Green, 38, said recently during a phone conversation from New Orleans, where he splits his time between his native Louisiana and Providence.

″(It gets to) where you have to have surgery in the offseason and then the rehab. The thing about pro football is when you get injured they speed you to get back on the field. That’s unlike the average person where there’s not really a rush to get back anywhere.”

Green is healthy and happy these days, and he hops out of bed each morning eager to attack his duties as owner of Oceans 97, a shrimp distribution business he founded in February, 2015.

The 97 is a nod to his uniform number with the Patriots and Oceans represents the wild-caught shrimp from the Gulf of Mexico he is passionate about delivering from coast to coast.

“Making people happy,” Green said of his business philosophy. “They go buy something that is satisfying, doesn’t kill their pocketbooks and maybe share at home with their family and enjoy. Not your average TV dinner, you know.”

The sky is seemingly the limit for Oceans 97, as Green is in the midst of a launch that will see his products, including four sauces he created, sold in upward of 700 Stop & Shop supermarkets along the East Coast beginning in mid-January.

A deal with Walmart will lead to Oceans 97 being available at hundreds of the retail giant’s stores in as many as 10 states starting in early May.

Green initially got involved in the shrimp business about six years ago, when a friend in Louisiana asked him if he’d be interested in taking advantage of his contacts from football to start selling shrimp in New England.

The idea intrigued Green. Problem was, he didn’t know anything about the shrimp business.

That issue was solved during a quasi-internship in which Green learned how to de-head and peel shrimp. He worked in an icehouse, delivered shrimp and, finally, sold shrimp.

“I learned how to walk and talk like a shrimp,” said Green, who only failed to pass one part of the crash course, that being to learn to speak Vietnamese so he could personally communicate with so many of those in the shrimping business.

“It was impossible,” he said with a deep laugh.

About three years later, Green began investigating the idea of starting his own company because so many of the people he encountered as a salesman thought he owned the business he was representing. And, with that, Oceans 97 was born.

That’s not all keeping Green busy these days.

He also the Jarvis Green Foundation, whose missions are to teach children how to live an overall healthy life and provide resources to single mothers who have been impacted by natural disasters, and is involved with the Patriots Alumni Club, doing meet-and-greets and such at a handful of games a season.

“So there are a lot of things going on,” Green said. “I just have to take them one day at a time.”

And, while this two-time Super Bowl champion doesn’t miss waking up sore the day after a game, he does fondly recall the time he spent with his teammates preparing to play.

“The thing I miss most about football is the camaraderie,” Green said. “Being in the locker room — to be honest, you’re with your teammates more than you’re at home if you’re playing professional football. And just traveling, hanging out, having a good time, studying, being on the field, communication before during and after. That’s what I miss most.”