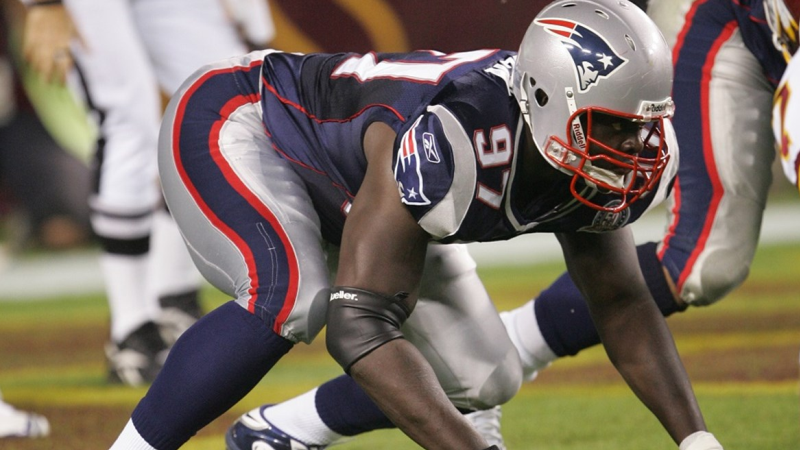 Although he grew up within a few hours of the Gulf of Mexico, Donaldsonville, Louisiana native Jarvis Green never knew anything about shrimp (other than the fact that he found it delicious), a major industry on the gulf coast. Now he’s on his way to becoming a shrimp mogul with his company, Oceans 97.

But before shrimp, there was football. A fourth-round Draft pick by the New England Patriots in 2002, the defensive end, a two-time Super Bowl champion (XXXVIII and XXXIX), Green spent eight years in Foxboro before briefly spending time with the Houston Texans in 2010, his final year in the NFL.

And before football, Green always put his preparation for life first. Growing up in Donaldsonville with four siblings including his twin brother, their twin sisters (yes, two sets of twins) and an older brother, his parents impressed upon them the importance of goals and setting a plan to work toward those goals. Green’s father has only a seventh-grade education. His mother earned a degree from Southern University, in spite of giving birth to the couple’s first child while still a student. So, for their children, college was non-negotiable.

“They taught us to get an education, go to college and make something of yourself,” Green said. “That’s what my mom put into our heads. Money’s great, but at the same time you still have your values, you have your goals, you have milestones you want to reach in your life. I tell kids today, you go out and you can break your leg tomorrow but you have your degree, you can work for the rest of your life.”

While football provided the ability to obtain a scholarship, even that almost didn’t happen. The NFL was never a childhood dream and at first, Green’s mother didn’t really want her sons playing. The oldest, Aaron, snuck off and played football for half a season before his family discovered what he was doing. And Green quit after his first day playing in the seventh grade. But then someone else saw something in him, and that changed his life.

“My coach, he had coached my older brother, he was the one who ran me down, and he was screaming at me, ‘Don’t be a goddamn quitter,” Green recalled. “‘What if I tell your family you’re a quitter?’”

Green quickly decided he wasn’t a quitter and stayed on the team, ultimately laying down the foundation for his future. Green went off to LSU where in spite of becoming the team’s fourth all-time sack leader, he never let his focus on academics waver.

Majoring in construction engineering and construction management, Green chose keeping up with his studies so he could graduate on time over a full-press preparation for the Combine, a decision he said probably lowered his Draft status, but that he has never regretted.

“I could have done better (at the Combine),” he said. “But I walked across the stage with my degree.”
That focus on planning for life didn’t change once he was in the NFL. Although he quickly became a reliable member of the Patriots defense, he never allowed himself to get comfortable. After his second and third seasons, he did internships at a Rolls Royce dealership in Massachusetts to start educating himself about the business world.

Then, shortly after he retired from the NFL, his current career in the shrimp industry presented itself. Green was building a hotel in North Dakota when he was approached with an idea from an acquaintance. Green had previously run a restaurant in New Orleans, and was familiar with the insular nature of the shrimp industry, which initially caused him to hesitate.

“I didn’t want to sell any shrimp and step on toes,” he said. “But, [the friend] said, ‘We’ll teach you to go to Boston. I worked for six months for free. Did the whole Forrest Gump thing. Mopped, swept floors, took the heads off the shrimp. I went from there to work in the freezer. I learned the business from the ground up. The boats, being on the docks, learning how to buy. And For me being African-American in the shrimp business. I stick out like a sore thumb.”

But that didn’t stop him, and seven years later taking all the knowledge he gained learning the business from the ground up, Green is now running his own shrimp distribution company, Oceans 97.

“What really drew me in was when I started working alongside the families down in the gulf, the impact on them of the storm, the environment, the market,” Green said. “The fishermen do so much work to get their shrimp out of the ocean and there’s so much the customer doesn’t see. The passion just grew with me. I never just thought that I would have this type of love and I want to fulfill it and have an end result to build a company and help those families. I’m a small company but as I grow I will give fishermen opportunities, and they will know they have someone who is going to buy.”

Despite all the time and energy his puts into Oceans 97, Green also still maintains The Jarvis Green Foundation, which he started in 2006. Its focus is on children and teaching them how to have an overall healthy lifestyle, including what they eat. The foundation recently partnered with Johnson and Wales University in Providence, Rhode Island, and the Providence Parks and Recreation Department to develop programs for the children in that city.

As for Oceans 97, the company has grown at a rapid rate. It already supplying shrimp to several large supermarket chains, and Green is in negotiations for several other significant deals, including the development of additional products. He is gratified to now see all his hard work coming to fruition, which includes projections of Oceans 97 being a $100 million business within 10 years.

“It hasn’t been perfect. It’s been tough days, long days,” Green said. “But, I think about the possibilities and the potential what we can become with hard work. If you keep doing it, you will be great.”

Lisa Zimmerman is a long-time NFL writer and reporter. She was the Jets correspondent for CBSSports.com, SportsNet New York’s TheJetsBlog.com and Sirius NFL Radio. She has also written for NFL.com.