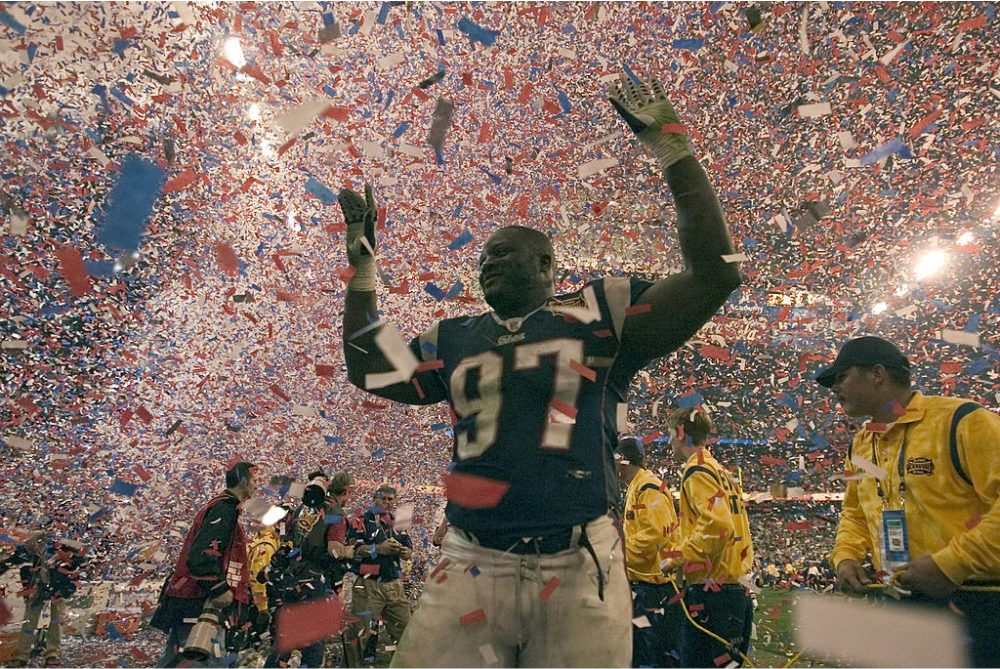 The first thing Jarvis Green wants to know, as we sit across the table from each other in the faculty cafeteria at Babson College, is which of the many nearby schools-that-start-with-the-letter-B houses my radio station.

The next thing I know, we’re talking about Green’s plans to sell pre-cooked shrimp to college students with “value added sauce packets” so they “can’t mess it up.”

And if those aren’t phrases you’d expect to hear from a former defensive end, you’re not alone.

“I used to play football in the NFL. Won my two Super Bowls. I never thought I’d be doing this, you know. Learning price points. Understanding what it costs to get a shrimp out of the water.”

Jarvis Green isn’t in the shrimp business because he needs the money. Sure, he could use more – he says we all could.

Jarvis Green is in the shrimp business because … well, let’s start at the beginning.

Lessons On (Not) Quitting

“I wasn’t a kid that said I was gonna be an NFL player. Never played little league football, Pop Warner, whatever you want to call it. I was small, man, I was – seventh grade, I was probably 5’7”. I had no muscle on me. Just all bones…and skin.”

On the first day of practice, the coach told Green to tackle his older cousin, who was twice his size. The hit was so hard that Green’s helmet spun around on his head. He found himself looking out through the ear piece.

“I’m like, this can’t be for real. He knocked the bejesus out of me. Coach said, ‘Hey, Green. Stop being a punk. Go up there and do it again.’ Did it. Almost swallowed my mouthpiece the second time. Looked around, took my helmet out and said, ‘I quit.’ Great ole coach Rabbaly, rest his soul, he passed away a few years ago. He followed me, was behind me, like, screaming at me. And then he said, ‘Hey, what if I call your mom and your dad and your brothers?’ They were all playing college football—my brothers. ‘What if I call them and say you quit? You was a quitter?’ Oh man. My older brothers were my heroes. I don’t want them to hear this. I put my helmet on, went back out there. That was the last time I quit anything.”

Green didn’t quit when his parents got divorced and he had to work to help his mom pay the electric bill. (He says for weeks at a time they were taking cold showers and walking around by candlelight.)

He didn’t quit when he was sidelined by a serious back injury while playing football at LSU.

And he didn’t quit when his academic load got tough.

“I hated being labeled just the football player. That always burned me, always. ‘Oh, you’re just a jock.’ ‘I’m not. I go to class like you.’ I went and picked a hard major. So I went to school for construction management engineering. And everybody says, ‘Oh, you’re going to change that five, six times.’ I said, ‘No I’m not. I’m going to graduate as an engineer, as a student — engineering.'”

In between studying for those engineering classes and attending practices and workouts, Green did something else that was pretty unusual for a football player. The thing is, while growing up in Louisiana, he had watched his mom and his grandma and his aunties in the kitchen. And, when his teammates got hungry in the off-season – when the university wasn’t allowed to feed them – he’d cook up huge stockpots filled with spaghetti and red beans, potato stew, shrimp stew, and jambalaya.

“I had an open door policy. I said, ‘Make sure you shut the door. Don’t lock it. When you eat, whatever bowl, plate you use, clean it.’ And then when I come home, whatever we got left, I put in the ‘frigerator.”

“So you weren’t even there. It wasn’t like everybody’s hanging out?” I ask.